Spring in the Vineyard

It's spring time!  TIme to finish pruning the bearing vines and get the young vines ready for the growing season. We cut back the vines to 4 or 5 buds at the base in their 2nd season so they can grow a strong shoot that will become the trunk for the new vine. The grow tubes protect the new growth from wind, deer and weed sprays.  Very soon we will build the trellis for these vines. Stay tuned as we show you their progress this year! 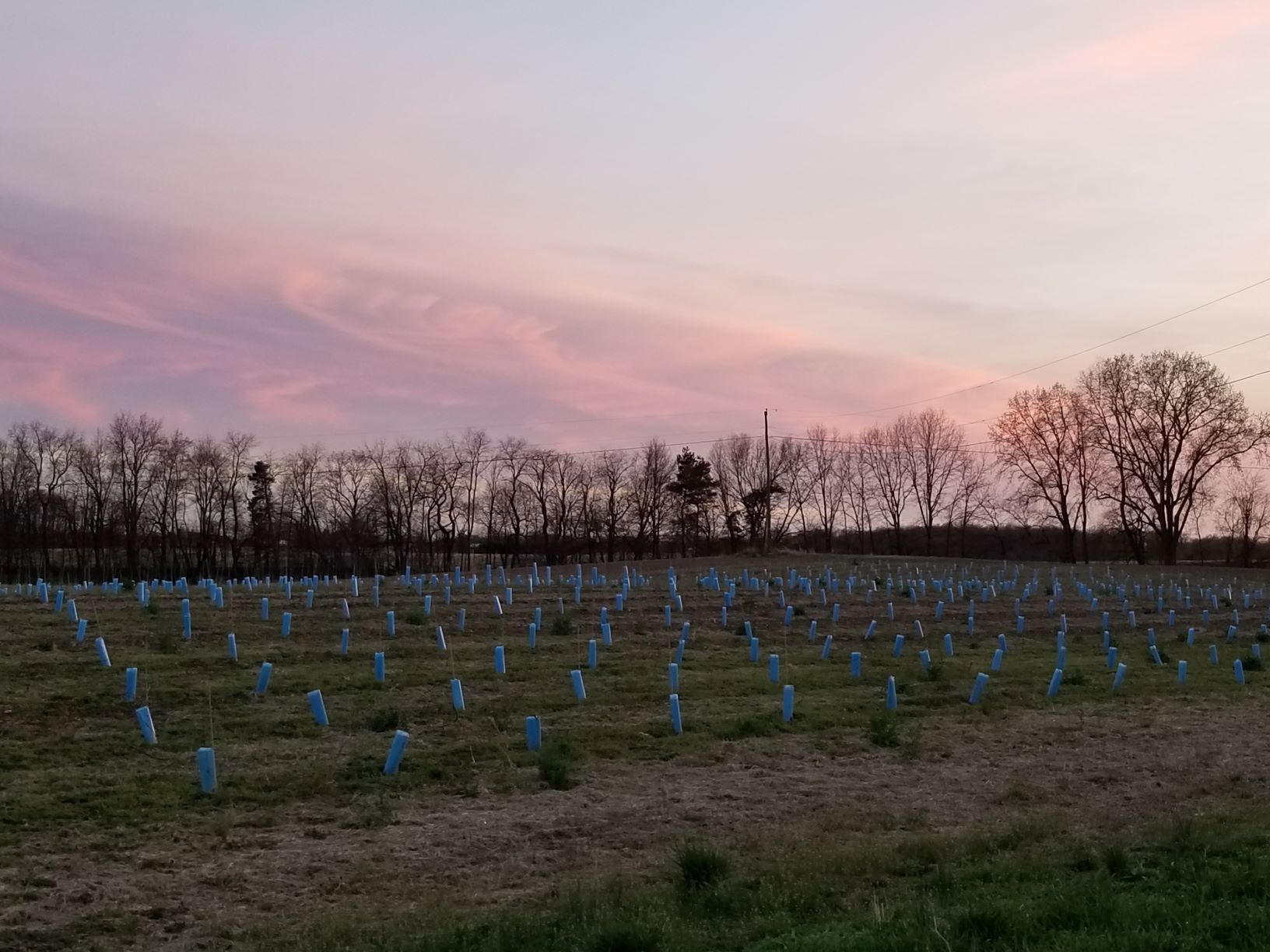 Where to find White Pine wines around southwest Michigan

When you are looking for White Pine wines and don't want to make the trip downtown, you can find them around the area in these fine shops:

We only offer our wines in shops that fully support the growing wine industry in southwest Michigan!

Our wines can also be found in these fine restaurants that support local wines:

Bistro on The Boulevard

Summer In The Vineyard

Just a few short months ago the vines were just coming out of their dormancy to begin the growing season. Seemingly overnight they went from small shoots emerging at the buds to a trellis full of leaves and fruit that are changing daily. So what goes on in the vineyard this time of year and why is it important? During the dormant season, we prune the vines to remove most (over 90%) of the buds that can produce fruit. If we don’t reduce the vines crop potential, too much fruit will be produced and it won’t ripen properly for wine or any other purpose. Over – producing fruit also weakens the vines going into winter making them more easily damaged by cold temperatures and, it reduces the vines crop – potential for the following year. When this happens the vines go into a “biennial bearing” cycle where a big crop is followed by a small crop which is then followed by a big crop and so on.

Once the buds we left at pruning open or “burst” the shoots start growing and the young grape clusters emerge. At this stage they are only flowers that must bloom and be pollinated to make grapes. So early in the season those of us who grow grapes and other fruits are always watching the weather conditions and hoping for good pollination weather during bloom. This year the weather was good and the grapes set well. That sets the stage for a good crop and is typically complete in southwest Michigan by the end of June. Once the crop is set the shoots keep growing and the young grapes grow rapidly. By mid-July we are in the vineyard estimating the crop to see if there is further crop reduction required to produce ripe grapes and good wine. In our vineyard we have been thinning fruit and small, weak shoots to open the vine leaf canopy to sunlight. At this time of year it may seem like a waste of time to expose the fruit to sun but, we are planning ahead for fall. We are removing some leaves around the clusters of grapes in addition to removing small shoots that crowd the vine canopy. We know that in September and October the days will be much shorter. The sun will be lower in the sky and its rays less – intense. There will be dew in the mornings and, if the fruit is hidden under leaves, it will stay cool and wet most of the day. By removing shoots and leaves that aren’t necessary, we insure that the fruit warms in the morning with the suns first light and actively ripens all day. It also helps the grape clusters dry out so there is less chance for rot to begin. The sun-warmed grapes ripen much faster and have better flavor than fruit hidden in the shade of leaves. So all of the work we are doing now is in preparation for ripening in the fall. By thinning fruit and opening the vines canopy we insure the crop is in balance with the vines ability to ripen it and, that it can take advantage of the cool autumn days to fully ripen our crop. The result is the wonderful wines that you enjoy from our little patch of heaven in southwest Michigan. We hope you enjoy drinkinh the wine as much as we enjoy making it.

The 2017 growing season has been great! Spring started with just a little frost and then the summer was warm with rain here and there. Now the fall is one of the warmest and driest on record. That means high sugars, low rot and wonderful harvest conditions. The early fermentations are text-book too. So far we have harvested Pinot grigio, Chardonnay and a couple of resistant hybrids for our blends. Riesling, Cabernet franc, Merlot, Chambourcin and the rest of the late-season varieties are hanging on the vines, slowly ripening and developing those complex aromas and flavors that we know and love in our wines.

Come out to wine country between now and Halloween and experience the sights, sounds and smells of harvest! Enjoy wines from past vintages, some great food, farm markets, fresh apple cider and donuts. Take a walk along Lake Michigan on a quiet beach now that the summer crowds are gone. Enjoy the season.

Grapevines, like all woody plants, take cues from the environment. During the long days of summer, the vines are growing and making grapes. They could not go dormant during that period if they had to. But as the days grow shorter toward the end of summer, the vines are able to detect that the change of seasons is coming and respond by storing starch reserves in their roots and trunks. They detect a change in the ratio of red light to far – red light that occurs as the days grow shorter. The green shoots that grew all summer begin to turn brown and woody so they can over - winter and carry next year’s crop. As the shoots turn brown or “lignify” they become tolerant of cold temperatures and can survive a frost. As the crop ripens the plant becomes more and more prepared for the cold winter months ahead. Finally, the leaves fall and the vine becomes dormant.

So what happens if there is warm weather during the winter? As it turns out, the vines do not achieve their maximum level of hardiness until there has been sub-freezing temperatures for several days. The vines become more tolerant of deep cold as they head into the coldest part of winter. During this time the vines are in what is called “enforced dormancy”. During this period they cannot begin to grow, no matter what the weather does. If you took a cutting of an over wintering cane into your house and put it in water it would not grow. This protects the plants from responding to warm temperatures and starting to grow in the middle of winter. As winter continues however, the vines are able to measure the passing of time so they “know” when to begin growing. The actual mechanism is not fully understood but the plants need a certain amount of time at temperatures between freezing and 40⁰ F to complete what is called their “chilling” requirement. This mechanism gives the plants a way to measure time during winter and allows them to begin coming out of dormancy once the chilling requirement is met.

The period when enforced dormancy ends is called “eco-dormancy” because now the vines depend on cool temperatures to keep them dormant. Once the temperatures warm the vines begin to grow again.
Understanding that plants have a way to measure time while dormant is fascinating and it helps us understand when plants might become vulnerable to environmental damage like winter injury or frost injury in spring.

Let’s look at our current weather for an example. The weather turned cold in December and stayed cold for several weeks. When the temperature stays below the freezing point the plant gets no chilling time. Now, in January, we are having a thaw and the temperatures are forecast to be above freezing for a week or more. During this time the vines are fulfilling their chilling requirements and are moving closer to being able to begin their climb out of deep dormancy toward bud burst in spring. What we don’t want right now is too much of this mild weather. If that were to happen the vines might begin to come out of deep dormancy before the coldest part of winter has passed which might lead to winter injury. Additionally, the more chilling the vines get now the sooner they will be likely to come out of dormancy. This sets the stage for early growth and then frost damage in spring. That’s what happened in 2012 when we had 10 days of 80⁰ weather in March. All of the fruit trees started to grow and bloomed. Then there were a series of frosts in April that killed the blossoms and there was virtually no tree fruit in Michigan that year.

So even in the middle of winter, the woody plants are alive and sensing the environment around them. They are measuring the passing of time and getting ready to start growing in spring so they can make another crop and complete another growth cycle. It is truly an amazing process and we have the privilege to watch it happen – if we just take the time to slow down and look.