Sandy and Dave Miller love the State of Michigan and have made a commitment to spend their time and effort here to produce world class wines for all to enjoy. Dave grew up in and around South Bend, Indiana where he learned to love the great outdoors and the natural world that surrounds us. During his Baccalaureate studies, Dave worked on a BS in Biology with a specialty in Plant Ecology and Botany at BallStateUniversity. Upon graduation in 1982, unable to find meaningful work near home during the great “Rust Belt Recession” he decided to move to Colorado and enjoy the winter working at a ski resort. It was during this Ski Bum period that Dave discovered the popularity of wine among the skiers who frequented the slopes in SummitCounty. A light bulb went on and Dave decided to continue his studies with pursuit of a MS degree in the Horticulture Department at Michigan State University. He worked with the legendary Dr. Stan Howell who is one of the preeminent viticulturists in North America. Dave fell under Stan’s spell and accepted a job as his technician upon completion of his MS degree which focused on grapevine cold hardiness. During the next twelve years Dave produced the research wines at Spartan Cellar’s, MSU’s research winery, and managed the research plots, and graduate student projects with Stan. The last four years of Dave’s tenure at MSU culminated in his PhD degree which he earned while working as Stan’s technician. Dave’s PhD focused on grapevine photosynthesis and how crop level influenced fruit and wine quality.

Dave looked for a position as a grapevine research scientist but none were available. A position was offered from ClemsonUniversity for a peach tree researcher and then came the offer from St. Julian for an assistant winemaker. The decision to leave academia was difficult but Dave’s love of grapes and wine prevailed and he accepted the challenge of raising the status of Southwest Michigan’s grape and wine industry through his work as a winemaker and viticulturist at Michigan’s oldest and largest winery. Change comes slowly in the wine industry. One must wait four years after planting a vineyard for the first crop, then another 6 months to bottle white wines and another 12 to 18 months to bottle reds. However there was great interest in and support for his work at the winery and the changes came, slowly at first, then with increasing speed. The awards given to wines produced from new plantings made under Dave’s direction were numerous.

During the second year of their life in Lawton with Dave at St. Julian, Sandy and Dave had their first and only child, Sophie. They enjoyed raising Sophie in the country while growing grapes and making wine. The family life suited them all and the pace gave Dave time to continue working on improving the grapes and wines at St. Julian. A vineyard was planted by Dave and Sandy in 1999 called “Sophie’s Vineyard” in honor of their daughter. The vineyard became the backbone of the Braganini Reserve Riesling produced by Dave at St. Julian. 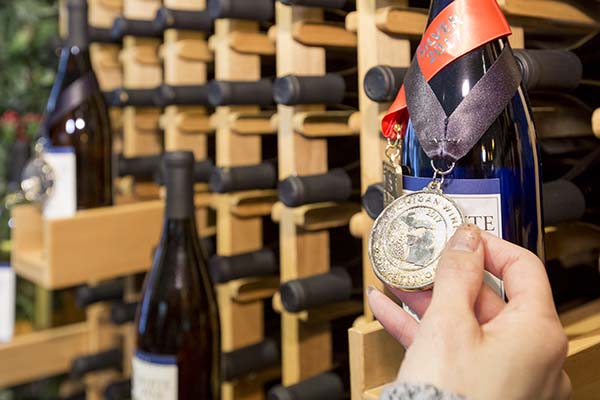 Now the Miller’s have begun the next leg of their journey in Southwestern Michigan’s grape and wine scene with the opening of White Pine Winery and Vineyards. Dave’s dream has been to continue pushing the envelope for wine quality in Michigan’s beautiful southwest. Now he and Sandy’s dream is a reality! In addition to the fruit from Sophie’s vineyard, they are working with local growers to produce the wines that showcase the awesome climate and soils which are the source of their wonderful wines. Dave’s philosophy is to let the vineyards express themselves in his wines with as little intervention as possible. He also is a firm believer in using sustainable principles in grape production so vineyard practices use the latest methods to reduce the impact on the environment. Using this approach allows the vines to express the unique qualities of each vineyard site in the wines. White Pine’s goal is to produce wines from Michigan’s Great Southwest to showcase the regions wonderful vineyards.

During White Pine’s start-up, Dave worked with other wineries to produce his wines until the winery in Lawton could be fully equipped. This relationship is known as a “Custom Crush” where a winemaker produces his or her wines in another facility with extra capacity. Beginning with the 2016 vintage, Dave began crushing grapes at the winery in Lawton. The first vintage saw the introduction of 2 new wines: Ladyslipper Blush, a dry rose' made from Chambourcin grapes, and; Mirage, a sweet, fortified dessert wine also made from Chambourcin grapes. Dave also produced Merlot and Cabernet franc in the first vintage at the Home Farm. He plans to continue producing reds and slowly working into white wine production as the facility grows. As of the 2019 vintage, Dave is producing barrel-fermented Chardonnay, Pinot grigio and Muscat Ottonel with plans to add capacity for the 2020 vintage. There are experimental wines produced in cooperation with Daddy Long Legs Vineyards of Benzonia, MI, including Teroldego and Borealis - a blend of Marquette, Teroldego and Cabernet franc.

The ulitmate goal is to have a tasting room at the winery where our friends and customers can enjoy a glass of wine at the source! We know you will love it as much as we do. The planned opening for the tasting room is in 2021  so stay tuned!